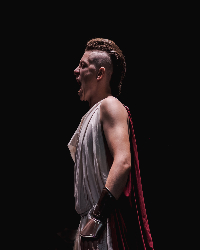 An Affair of Honor Production presented by Presentation House Theatre

Affair of Honor livestreams ancient action adventure in this thrilling, hilarious, and daring tale of mortals and Gods. With the ongoing onslaught of the Trojan War, tensions between the Greek Gods come to a head. Ares and Athena, two Gods of War, vent their frustrations by playing with the lives, deaths, and sanities of two mortal Warrior-Queens.

This original story flashes across eras and fight styles, providing a dazzling display of fighting prowess and ability, interspersed with the modern, lively banter of the Gods. Underneath the fiery exchanges of words and swords, the play takes a hard-hitting interrogation of what drives humanity to violence.

This is Affair of Honor at its core: Furious and Fun.