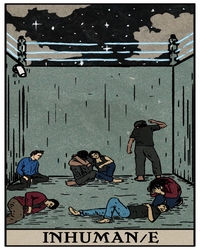 INHUMAN/E is an interactive drama in which audience members assume control of seven strangers trapped inside of an alien testing facility. The objective for our viewers will be to save as many characters as possible from a gruesome fate. This show was created and written by our ensemble of actors over the course of several months and initially premiered as a feature film.

Viewers of this live show will take on the role of the show's jury, determining which candidates will survive each test with every decision they make. We are eager to discover whether or not the audience will be able to put their personal motivations aside to come together and save as many candidates as possible.